The red lionfish, Pterois volitans, is native to the Indo-Pacific region. Sometime in the 1980’s, these fish were introduced into the Atlantic waters off the coast of Florida sometime during the 1980s. Since the early 1990s, they have been spreading across the southern Atlantic and Caribbean waters as one of the fastest spreading invasive species.

An invasive species is a species that has been intentionally or unintentionally introduced into a habitat outside of its natural range, also known as introduced species or alien species. At the point of introduction, the introduced species will either perish or thrive depending on whether they can adapt to their new environment. In most cases, although the animal may live for a short time, the environment is not suitable for their long-term survival and the species cannot become established in the new area. However, occasionally species are able to overcome the barriers presented by the new environments and become abundant. Humans have contributed to the spread of several species by breaking down these barriers, particular through international flights and shipping. Humans have also introduced several species to serve as a food source or as exotic pets. Although not all invasive species have negative effects on ecosystems, the majority do including: reduction in ecosystem biodiversity through direct predation or competition with native species, introduction of new diseases/parasites or habitat alteration and degradation.

Lionfish have several key traits that allow them to be a successful invasive species. They are a relatively hardy species which allows them to withstand a range of less than ideal conditions. They also reproduce very quickly; Lionfish breed every three to four days in the late afternoon/early evenings year-round! This courtship requires males to congregate in a group as the males pose to show off to expectant females and dart at their rivals, spirally upwards above the sea floor. Studies show that the females go on to lay approximately 30,000 eggs each time. Another trait is the ability to colonize and populate. According to the genetics of the Atlantic lionfish, it is possible that as few as three females could be responsible for the entire population. Furthermore. Lionfish are opportunistic and are able to spread quickly in a previously unexploited habitat. They can and will feed on any prey available.

Do to their rapid population expansion and their aggressive feeding behavior, lionfish have the potential to become the most disastrous invasive species in history by drastically reducing the abundance of coral reef fishes and leaving behind a devastated ecosystem. Around the Caribbean, lionfish act together with other stressors such as climate change, over fishing and pollution making this invasion of particular concern for the future of the Atlantic and Caribbean coral reefs. Predators in this region have no experience with the venomous spines of the lionfish resulting in limited predation attempts from groupers and sharks. In the pictures below, the rapid increase in the lionfish can be clearly seen starting with the first sighting in 1991 and continuing to 2013.

This information can be quite concerning so what can you do to help? The best tactics to fight this invasion are directly reducing the population, community outreach and education as well as further research. Efforts to reduce the densities of lionfish at key locations may help to lessen their ecological impacts. Recovering and maintaining healthy populations of potential native predators of lionfish, such as large grouper and sharks, may also help reduce the effects of these voracious invasive predators. By Educating people about health risk and effects to the environment and commercial fisheries, people may then become more inclined to eradicate the fish whilst spear fishing. This will also teach people that lionfish are a tasty source of food, especially with the dwindling supplies of many other fish stocks. They are not poisonous when cooked as the heat from cooking denatures the venom. The spines can also easily be removed by people who have been taught how to handle the lionfish correctly. In addition, lionfish could be used as an example to educate the aquarium industry and the general public about the dangers of intentional or unintentional aquarium releases. 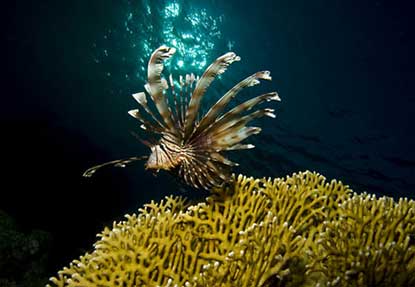 There are multiple places in the Caribbean where you are able to eat lionfish at local restaurants and also learn how to cook lionfish yourself. You might find you recognize some restaurants on Bonaire!

For those who are visiting Bonaire, please drive demand of the fishery by ordering lionfish when you are out for dinner at a restaurant. You can also take the PADI Lionfish Hunter Specialty (2 dives) to learn how to hunt the fish yourself using an Eliminating Lionfish (ELF) Device. After the course, you can hunt with a local guide and then have a BBQ with the fish you “hunted” on the beautiful reefs of Bonaire.